A nice double-activation that can be done well within one day. Activated together with Clemens HB9EWO. There are convenient parking spaces in the forest just at the foot of the mountain. They seem to fill up rather quick though, as at 08:30 we just managed to get the last free spot (Saturday and good WX). The ascent to the first summit (OW-019 Mittaggüpfi) is well marked and gets gradually steeper. There is one slightly exposed part where a rock wall has to be crossed, followed by a steeper passage where hands might bee needed to get up. Getting to the summit took us about 1h 20 minutes (with a short break in between). The second part follows the ridge first, then descends a bit on the south side of the ridge. Some steep passages follow; chains and wooden steps help a lot passing the more difficult parts. Footing is always good. At the lowest part between the two summits is the Tripolihütte (1763m) where drinks and food is available on sunny weekends. After the hut, the path follows the ridge again, until at Pt.1843 a rock face has to be crossed. Slighty exposed again, but still good footing and chains to get a secure grip. The second part from Mittaggüpfi to Stäfeliflueh took again 1h 20minutes. I was already a bit exhausted and suffered from the heat (it was a very hot day), so this may be done quicker. On Stäfeliflueh we enjoyed the marvellous view, had a snack, and worked the chasers for almost two hours. SOTA at its best! The way down is very steep in the beginning (we were glad not having taken the opposite way round). Again some steep passages secured by chains or ropes, followed by endles zic-zac through the forrest (finally it got cooler), ending up directly at the parking spot again. 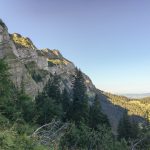 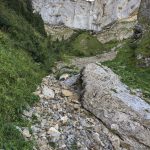 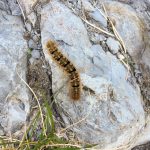 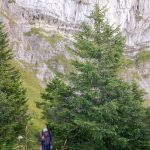 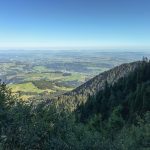 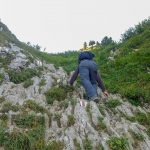 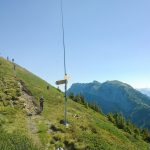 The signpost is still in the activation area (and less crowded) 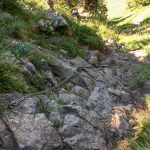 All difficult passages are well secured 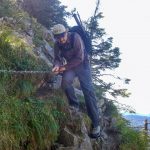 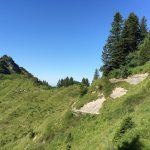 Stäfeliflueh, the next Summit to the left 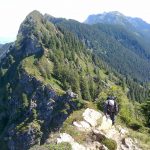 Iron bars and brackets help getting up 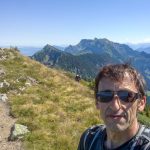 HB9EWO already on the summit, while HB9TVK is still struggling 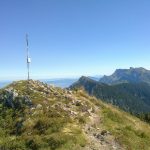 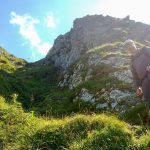 Steep descent from Stäfeliflueh. We were glad not having taken the opposite way. 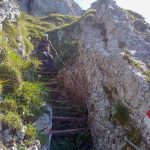 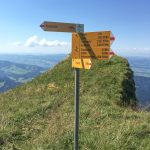 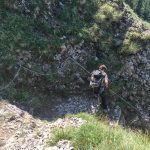