My first activation outside HB9. I decided to extend my business trip to Skopje (Macedonia) and head for a SOTA activation. Thankfully, two of my work colleagues, Andon and Frosina, agreed to act as local guides. Due to their biking activities they were very familiar with the mountains north of Skopje and suggested to head up Mount Ramno. There’s a paved road going up almost to the top, taking less than one hour driving from Skopje by car (passing the villages Pobozhje and Brodec). After a short warmup hike to another (non SOTA) summit nearby, we tackled Ramno which took about 30 minutes of easy walking.
On the summit there’s a large (probably military) base, so the highest point is not accessible. There’s however enough space to the east of the base that is still within the activation zone. I was worried a bit about getting into trouble when erecting the antenna, but fortunately we were completely ignored by the base’s staff.
There weren’t any good possibilities for mounting an antenna mast (I didn’t dare to use the base’s fence), so a guying kit would have helped. We had to improvise a bit using some rocks and the hiking sticks. Due to the not so optimal (low hanging) antenna setup, the QSOs came in slowly, but in the end I was very satisfied with the 16 QSOs from all over Europe. The last QSO was even a S2S from DM/SX-001 (Fichtelberg), being somehow the cherry on the top of the activation.
After the activation, we concluded the day with a nice picnic with some cheese, croissants, dried meat and an excellent local red wine in a nearby monastery. What great way to end a SOTA day. Many thanks to Andon and Frosina for their guidance and company!

Mount Ramno seen from a nearby summit

Start of the trail next to the paved road

The summit is occupied by this base. You have to go left around the fence to get into the activation zone.

Setting up the end fed dipole

The first QSOs coming in

Working stations all over Europe

Nearby picnic spot at ancient monastery 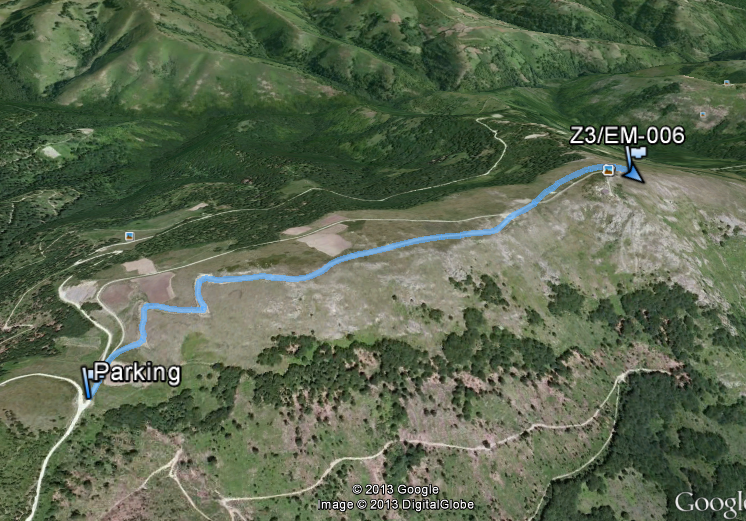